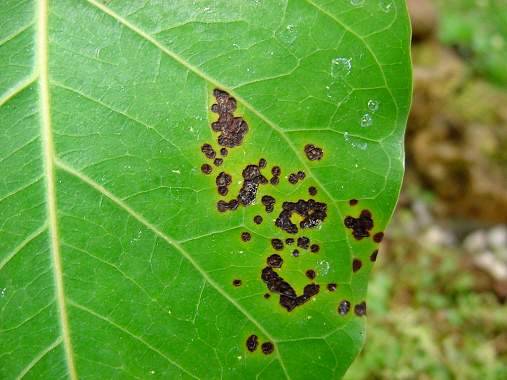 Today in our blog we will explain you the most common parasites and diseases, in order to help you identify the related health problems they cause in your bonsai and find the most suited phytosanitary treatments to remedy it.

Many of the anomalies suffered tend to be related to excess or lack of watering and, for indoor bonsai, to lack of light and humidity.

In these photos you can see the details of the general appearance of the leaves of a Ficus retusa when it is attacked by thrips, an insect that is one of the typical plague for this species. The main symptom occurs in leaves that roll themselves up, with gray and dry marks on which black spots appear. The insects lodge in the remaining space where they deposit their eggs. The attack can weaken the plant thus threatening its sprouting and good development. This is why the best treatment is to spray systemic insecticides on the foliage and remove the affected parts.

The following photos show aphid attacks. The most common types of aphids are green and black. The eggs hibernate on the bark, from mid-April to late September, time when the insects can be found at the ends of the shoots. The aphid is a pest that is visible to the naked eye and colonises the tender shoots, feeding on their sap. Sooty mold often occurs, these are fungus coming out because of the molasses secreted by the aphids. These pests can be dealt with using specific systemic contact or ingestion insecticides.

These other photos correspond to a cochineal attack on the bark and branches of a Ligustrum. These insects include many species and can appear in different parts of the plant, feeding on bonsai sap and thus causing effects such as leaf malformations or sooty mold appearance, as in the case of aphids. It causes a general weakening of the bonsai. There are specific insecticides to control this pest, in addition to the manual cleaning of the bonsai.

Finally, the most important thing is to realise that every day we learn to better understand our bonsai. We leave you with the following link to remind you about the basic cares of bonsais.