Cochineal is the most common pest in bonsai. Sometimes it goes unnoticed, hidden between the needles of the pines or simply mistaken for roughness of the tree’s bark. The cochineal family, together with aphids and some whiteflies, are part of the extensive order of homoptera.

There are various known species of cochineals, and due to their type of reproduction and feeding, they cause damages to agricultural and forestry crops. In this way, bonsais are also potentially affected by cochineals.

In bonsai, cochineal or cottony mealy bug is common, especially in trees with high crown density where the air does not circulate properly. Under these conditions, the inside of the croCottonywn becomes an especially attractive habitat for many species of cochineal.

How can we identify the symptoms ?

Symptoms that help identify attacks caused by cochineals are easy to observe. Unlike aphids that prefer tender leaves, cochineal is less demanding and appears on both young and old leaves, and even on the branches. They leave there small yellow dots, where they deposit their shells. In the case of obscure mealybugs, the masses of individuals and the whitish filaments and waxes they produce are perfectly visible. 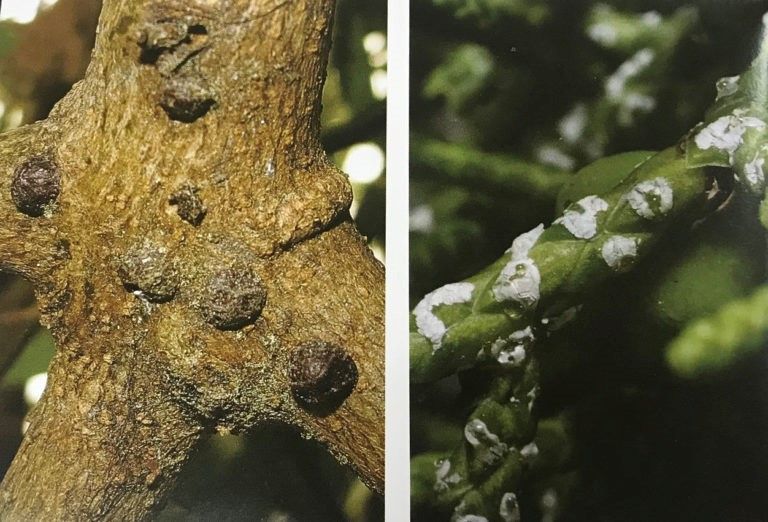 Consequences they produce in bonsai

The cochineal feeds on sap from the trees they parasitize. One of the consequences for bonsais in case of strong attacks is the general weakening. The deformation of the leaf and the growth of cecidias (galls) are also part of the harmful effects they produce on bonsais.

Control and elimination of cochineal

The control method is similar in all cases. Prevention is very important because once the pest has been established, its definitive elimination is not as easy as it is with aphids for example, because the cochineal shell acts very well as a protective structure against insecticides. As a prevention method it is important to keep a well-ventilated crown, limit the application of water on the leaves, and use some preventive insecticides during summer (time of greatest risk of pests).

For the elimination of the pest, in the first place and in case of having several bonsais together, it is necessary to review them to ensure that the pest has not spread. The next step would be to isolate the affected bonsai from the rest of healthy bonsais, in order to prevent the plague from spreading. Then, we will choose the most effective way to eliminate the plague. There are several solutions:

– Mechanical removal: a hose with pressurized water and even pressurized air could drag some of the shells and armours , but the remedy would not be very effective. It would be best to perform a small pruning to create some aeration if necessary, and manually remove the leaves affected by cochineal.

– Chemical treatments: it is the most used type of treatment in bonsai. The treatment is carried out with very powerful systemic or contact insecticides. The most difficult when applying an insecticide to the cochineal, is to get the right time to do it, since the presence of shells or armours provides good protection to the insect, hindering the action of many of the insecticides. It should be applied twice a week until the total disappearance of the pest.

A good option, complementary to the treatment, would be to reduce humidity in areas where there are cochineals. If the irrigation of the affected bonsai is reduced a little, it will prevent them from finding a suitable place to reproduce.

The prevention and control

After removing the cochineals in any of these ways, a preventive insecticide should be used and sprayed on all the bonsais, repeating the application every fifteen days. It is important to check the plant from time to time to ensure that there are no cochineal left on the underside of the leaves or on the stem.

For the application of any insecticide, it is necessary to take certain precautions:

2- Before application, thoroughly wash the leaves of the plant with soap and water

3- Spray the plant in a well-ventilated place.

4- Apply the product at a suitable distance, as it can damage the plant.

5- Do not apply the product on very hot or very cold days and do not leave the treated plant in the sun.