Japanese Maple. From the latin “acer”, hard, because of the hardness of wood and “palmatum ” because its leaves have the same shape as a hand. 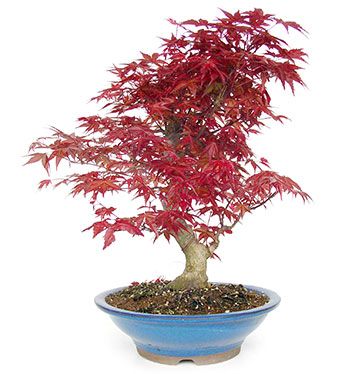 Tree of deciduous leaves valued for its coloured leaves in autumn and during growth seasons. There exist thousands of varieties, one of the most valued is “deshojo” with a spectacular red colour sprouting period, maintaining the same colour until summer when the colour of the leaves changes to green and then to red again with the beginning of autumn.

Outside during the whole year. Protect against strong sun of noon or place in semi-shadow.

Abundant in summer and moderate in winter. If the climate is dry, in summer, pulverise the leaves with water because it needs a certain air moisture.

In spring and autumn.

Every two years at the beginning of sprouting in spring.

Prune at the beginning of spring.

During the whole spring with the tips of your fingers

Its Japanese name momiji is the word as for the colour of autumn.