From the primitive name in latin “pinus”, the greek “pitus” and from the ancient word “pix-cis” what means resinous; and “penta”, five and “phylla” leaf. 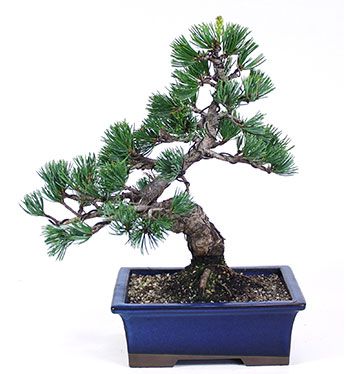 Evergreen tree whose leaves are called needles. The needles grow in bunches of five and have white stripes on the undersides. They belong to the order of the conifers because its fruit, the pine, has the shape of a cone. It’s a tree which you can find in the mountains and of slow growth. As a bonsai you will often find it grafted on to the stronger rootstock of P. thunbergii.

Place in the exterior in full sunlight. It’s one of the trees which needs the greatest exposure to sunlight.

Pines need controlled watering. An excess of watering and with spoil with poor drainage can have fatal consequences for the life of the mycorrhizae. These are fungus whose roots act in a symbiosis with those of the pine and help it absorb mineral elements of the ground like phosphorus. Without this fungus the tree weakens and at then dies.

Spring and autumn. It’s preferable to use organic fertilizers which favour and preserve the mycorrhizae.

Every 3 years, at the moment of budding and before the opening of the needles within the buds. In our Mediterranean zone this is in the middle of March.

To be done in the coldest months of the year. Leave needles and leaf buds on the branches otherwise they will dry.

Pinch-off one third to half of new shoots each spring. Every other year, prune branch tips in early autumn. To allow light into the tree, remove old needles in late summer or early autumn.

From October to March. It’s recommended to use copper wire because this tree is very flexible and therefore the wire has to remain for a long time on the tree.

In Japan this pine is considered to be female. The light colour and the texture and size of its needles give it this character. It’s one of the more emblematic bonsai.