Name given by Linné in honour of his friend Magnus von Kagerström (1691-1759) from Göteborg. 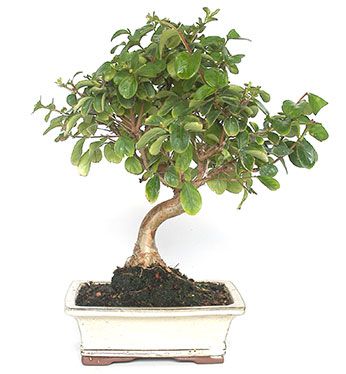 Deciduous tree. Appreciated for its autumnal red-yellow colours, its flowering and its smooth bark which flakes off.

In the exterior exposed to the sun during the whole year. Protect against frost.

Abundant in summer and moderated in winter.

From spring to mid-autumn with organic fertilizer or liquid NUTRIBONSAI from MISTRAL, applied every two weeks through irrigation water.

Every two years at the beginning of budding.

At the end of winter, just before the spring sprouting.

In late spring, trim new growth to two or three leaves. Flowers will appear on the new shoots, so trim again in autumn after flowering.

Throughout the year, but better in spring according to the climate.

The Japanese name of this plant Sarusuberi, means “where the monkey slips” because of the smoothness of its bark. We can find different varieties with different colours of flowers from pale pink to different shades of white.