Native of the Sichuan-Hubei region of China

The prefix “meta” comes from the Greek “close” with which Metasequoia mean “Near Sequoias”. 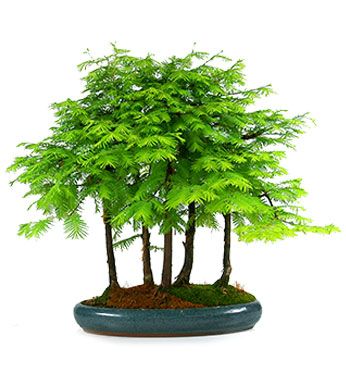 In the outside all year. Protect against extreme frosts in winter.

Abundant, especially in summer. Reduce watering when the tree has lost its leaves; tolerates some degree of water saturation of the substrate.

Spring and autumn, reduce the dose in the summer.

Every 2-3 years in early spring.

100% Akadama or mixed with up to 30% of volcanic gravel. It is not an overly demanding plant in substrate quality.

From October to March, when the plant has no leaves. Cut the buds coming out at the base of the trunk.

Throughout the growing season. The tender buds intersect generally with fingers, before they harden.

Between the spring and summer. Remove ligatures when the shell begins to be affected. Do not wire recently re-potted trees (Wait 4 months of vegetative growth).

The genus Metasequoia has only one living species, Metasequoia Glyptostroboides, but there are other as fossils that were found in many areas of the northern hemisphere, from Axel Heiberg Island (North of Canada) to the West located at Badlands of North Dakota in the US.