From the Ancient Greek “rhódon”, rose, and “dendron”, tree. 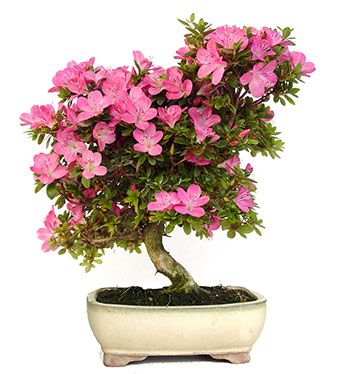 Shrub or small deciduous or evergreen tree according to species or variety. The Azalea is very appreciated for its flowering. There are thousands of varieties and new ones are discovered every day.

Outdoor throughout the year.

Abundant in summer, moderate in winter.
It requires pure water, with an acidic pH.
It does not support lime.

Every 2 to 3 years, after flowering.

When the shoot has grown up to 6 to 8 leaves, cut down to 2 leaves.
It is convenient to thin the flowers, so as not to weaken the plant. We will leave the flowers for a week, after which we will remove them. At the point of insertion of the flowers is where the buds will appear, usually in the number of five. From these shoots we will select the two that are best placed horizontally, eliminating the rest. These two shoots will be pinched to two leaves. We will also remove the old leaves.

In Japan, the cultivation of azaleas (“Satsuki”) as bonsai forms a separate discipline, having its own asso-ciation of amateurs and professionals. Azalea, unlike most plants designed as bonsai, has more vigour in the lower branches than in the apex, which we must take into account when pruning and pinching.