From the primitive Latin name “pinus”, from the Greek “pitus” and from its old word “pix-cis”, meaning resinous; and «densiflora», abundant flowering. 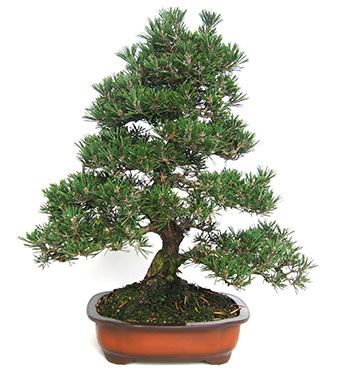 Evergreen tree, with leaves called “needles”, arranged in pairs. It belongs to the order of conifers, since its fruit is cone shaped, and thus called “pine cone”. It is a tree similar to «P. thunbergii », although not as vigorous, with longer and thinner needles.

It has to be located outdoor, in full sun. It is one of the trees most in need of sun exposure.

Pine trees require controlled irrigation. An excess of it, especially if the substrate does not drain well enough, is fatal to the life of mycorrhizae. These are fungi whose roots (hyphae) act in symbiosis with those of pine, helping them to absorb mineral elements from the soil, such as phosphorus. In their absence, the tree weakens, and eventually dies.

Spring and autumn. It is preferable to use organic fertilizers, favouring and protecting mycorrhizae.

Every 3 years, at the time the candles (growth bud) stretch out, before they deploy the needles they contain. In our Mediterranean area it is usually mid March.

Done in the coldest months of the year. Whenever we can, we have to leave needles and buds on the branch when pruning, otherwise it will dry.

It consists of two very precise moments:
1- At the spring growth of the candles: we will slow the strongest ones, by breaking them with the fingers and leaving only 1/3 of the candle. We will break the medium ones in half. Of the weak ones, we will only eliminate 1/3 and, if they are very weak, we will not touch them. We must do this before the needles deploy; Generally, in the month of March.
2- After the first pinching: when the new needles that we have left have matured, we will cut with scissors the candles that we had already pinched from their base, in the following order: first we will cut the weak ones, after about ten days, when we see new buds appearing in the cut area, we will pinch the medium candles in the same way, and then, after another ten days, we will end up pinching the strong ones. This is usually done at the end of June.

From October to March. Preferably with copper wire, since they are very flexible trees, wire must remain a long time.

In Japan, this pine is highly valued for its rough reddish bark and the shine of its needles. It is usually modeled in bunjin (literary) style.

This website uses the cookie _ga owned by Google Analytics, persistent for 2 years, to enable the control function of unique visits in order to facilitate your navigation through the website.
If you continue browsing we consider that you agree with your use. You can revoke the consent and obtain more information by consulting our cookie policy.ACCEPT
Privacy & Cookies Policy

Any cookies that may not be particularly necessary for the website to function and is used specifically to collect user personal data via analytics, ads, other embedded contents are termed as non-necessary cookies. It is mandatory to procure user consent prior to running these cookies on your website.