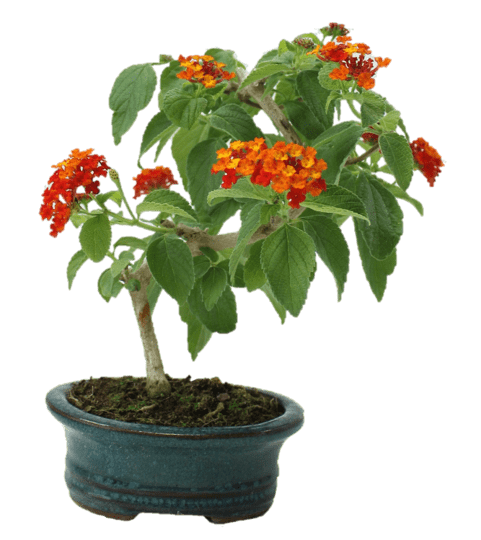 It is an evergreen shrub, very branched and fast growing. Its leaves are oval, opposite, dark green, with dentate edges, and a bit rough in the underside.
Lantana is characterized by its abundant flowering, with compound inflorescence, in panicle, with a great diversity of possible colours, from yellow to mauve. Each shrub has a hue of one to three colours at the same time, since the different parts of the flowers appear in several phases with a change of colour from the first to the newest.
It blooms from spring to autumn, and gives fruits in drupes, turning from green to black when ripe.
Both its flowers and its leaves stand out for their fruity smell.

The ideal location for this species is in full sun. It resists very well to hot weather, does not like cold much, and is sensitive to heavy frosts.

It is necessary to let the surface layer of the substrate dry slightly between two watering. They support droughts well, nevertheless it is convenient to increase watering in summer in order to favour flowering.

From spring to mid-autumn with organic fertilizer or liquid NUTRIBONSAI from Mistral Bonsai, applied every two weeks through irrigation water.

Every two years, at the beginning of spring.

TERRABONSAI de Mistral Bonsai ; Otherwise a mixture of 6 parts of Akadama, with 4 parts of volcanic gravel can be used.

It is a species that resists any type of pruning very well. Prune in late winter.

Pinch during the growing season (from April to October), when the new shoots have reached three pairs of leaves, maintaining the original bonsai profile.

It is not a bonsai to which the wiring of its branches is practiced much. However, in case of doing so, it is advisable to do it in spring before the sprouting.

It is a species of great rusticity and rapid growth, which attracts a lot of birds, bees and butterflies. That is why it has become an invasive species in many tropical areas.